Okay!! I'm officially done with colour casts. HELP! I've been a natural light newborn photographer for years and I've always struggled with the colour casts in my family photographs. They look great in BW but when I print them in colour.. I hate them. Sure my customers don't notice but I do and I want to be better! I shoot directly on the (light cream painted) wall of my studio there is a window on the left of me and I also have a JINBEI (which I put on the left of me also as I like shadows on faces and don't want flat light) to add more light and catch lights in the eyes. My newborn photographs are fine as they are not usually on white. Anyway... How do I prevent this easily? I don't specialise in family portraits it's just a bonus for when people get newborn photographs so I don't want to invest heavily into the issue. use a Reflector somehow? moving customers further away from wall? get better at editing? learn to use more lights and add one to the wall to blow out the colours? Use a grey card and custom WB? screw the wall and buy a dark cream backdrop? haha I'm out of ideas.. Thank you for your help!! 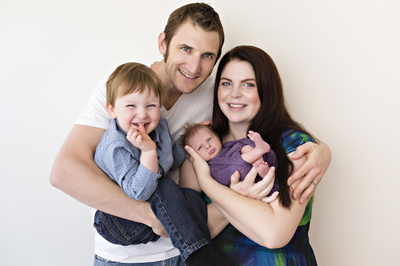 3 answers to this question